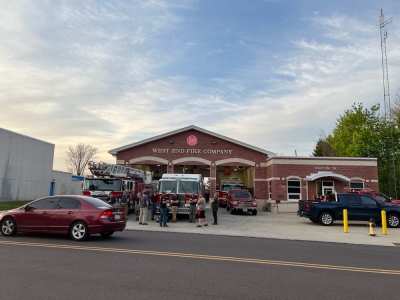 On Saturday April 30th, Tac 9 was dispatched as part of a regional strike team to respond with Sta 58 (Trumbauersville) on a 2 alarm fire off of Rich Hill Rd. in West Rockhill Township. Crews were ba...
➜
Penndel Dryer Fire

Shortly after 2100 hours, Box 8-10 was transmitted for the Laundry Depot on Durham Road in Penndel Borough. Assistant 8 arrived on scene with heavy smoke on the interior. Engine 8 arrived and establ...
➜
Ramble Road Brush Fire

PFC was dispatched for a reported brush fire in the 1600 block of Ramble Road. Deputy 9 arrived with a 40 x 20 fire involving rubbish and brush extending out. Engine 8 and Engine 21 were added to as...
➜
Langhorne Manor Garage Fire

1838 hours, Engine 9 was dispatched on Tactical Box 21-8 for a reported garage on fire in the 800 block of Bellevue Avenue. Deputy 8 and Chief 21 arrived to report light smoke coming from the roof of...
➜
News headlines
100th Anniversary Celebration 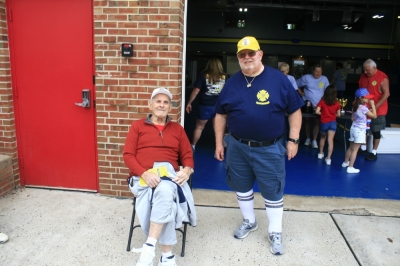 Some more sights from our celebration!
100th Anniversary Celebration

We would to say Thank You to everyone who came out to visit us and help us celebrate a Century of Service! The day's events kicked off with the bike parade, hosted by the Parkland Presbyterian Ch...
➜
Daisy Scout Visit 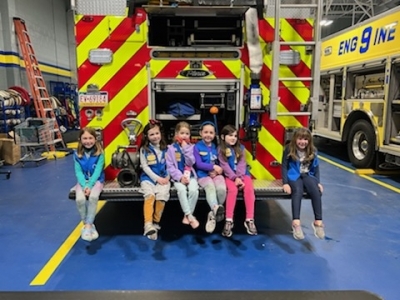 Thank you to the Daisy Scouts for stopping by to pay a visit! The girls were given a tour of the trucks and got to see what a firefighter wears into a fire.
Board of Governor's Meeting

On Tuesday March 1st, the Parkland Fire Company held it's Board of Governor's meeting. Typically, this meeting is held every five years, but this round was delayed due to the COVID pandemic. ...
➜
History

Parkland’s population explosion in the early 1920’s must have ignited interest in the formation of a fire company. Early in the next year, some men from the village met in R. Tisdale’s home at the foot of Avenue C to talk over the formation and organization of a fire company. As a result, the Parkland Fire Company No. 1 was officially organized and held its first meeting on September 1, 1921, in the Community House. According to the minutes, Joseph Hibbert was the first president and Jacob Root, the first secretary.

By the time the group of firemen met again, one week later, fire company fever was spreading throughout the village. Twelve more men came to that second meeting to ask for membership applications. The records read that H. Degenhart, W. Bodenschatz, A. Henning, R. Tisdale, W. Nutler, J.C. Louden, C. Carter, J. Detweiler, Mr. Einholtz, R. Pilerio, J. Wilson and C. Waterman paid one dollar due each and were accepted into the new fire company.

On September 15th, 1921, still another meeting was held. At this time the new firemen’s slate of officers was completed with H. Lake elected to the vice presidency and Irwin H. Heckroth, secretary. Fred Maag became the fire company’s first financial secretary. Also, it was on this date that they acted on the first Parkland Fire Company charter.

Meetings continued to be held and by November 3rd a constitution and the bylaws were accepted and the go ahead was given to apply for the charter. However, the charter did not come through until early in the year 1922. During the first summer of the fire company’s existence members raised a total of $900 from a carnival and card party. From this treasury they used $300 to purchase two lots of Avenue A. Plans called for a firehouse on those lots and the purchase of a chemical truck.

Then, for some unknown reason, the fire company disbanded on October 3, 1925.

During the next twelve years, as before, Parkland continued to depend on Langhorne for the fire calls. Many old-timers recall that late in the fall of 1937 a house fire on Sunflower Avenue brought a group of young men – all members of the Parkland Boys Club meeting nearby – to the realization that the Parkland Fire Company must be reorganized. The young men persuaded Clifford Scheetz to help reactivate the dormant fire-fighting organization.

Two lots on Avenue D were acquired prior to that 1938 date so the $296.04 original treasurer Clifford Scheetz had guarded since 1921 went toward materials for a firehouse. The men of the village started to build the firehouse and didn’t stop until it was completed. Probably never before, or since, has so much enthusiastic brotherly love been so evident for any one project here in Parkland.

Application was made to the First National Bank and Trust Company of Newtown, Pennsylvania, for a loan of $5,100. When their loan officer came to investigate, he happened to see the new firemen down in the excavation digging the foundation by hand. The sight so touched the man he granted the loan without question and without signatures. He was heard to remark that the determination and cooperation he witnessed was enough collateral for him.

As the men worked to build the firehouse, on weekends mostly, the women were close at had with all sorts of good food to feed them.

Tradesmen needed in the construction of the new firehouse were mostly all from the village. Since the building was made of masonry and brick, local masons and bricklayers starred in their respective vocations. The original firehouse was a one-story building with two bays for apparatus. When the engines were out-of-doors, a large meeting hall with a stage made up most of the interior, bordered by a kitchen, rest rooms and a coatroom.

The company’s first time fire truck was a 1938 Ford made especially for Parkland by a firm in Willow Grove, Pennsylvania. It boasted a 500-gallon tank with a front mounted pump. Appreciated possession came their way when Edward J. Pierson donated 2 lots next door to the firehouse. It came in mighty handy for carnivals and for parking.

The fire company purchased their second new truck in 1947. It was a Maxim with 500-gallon capacity and a 500-gpm pumper.

The Ladies’ Auxiliary of the Parkland Fire Company organized on December 8, 1921 and elected Mrs. Marion Pierson, president; and Mrs. Leah Tisdale, treasurer. The women met in the Scheetz recreation room at first. During the second year of the auxiliary’s existence they boasted a membership of eighty, but unfortunately, they too disbanded in 1925.

When the auxiliary reorganized, in 1938, membership totaled eighty-eight. Mrs. Dorothy Huntzinger was elected their first president.

Much credit can go to the auxiliary for it was through their efforts, hard work and “nothing-is-impossible” attitude that enough capital was raised to maintain the building and equipment during the trying years of World War II. In recognition of the auxiliary continued to serve refreshments. Coveted trophies are aptly displayed in the firehouse as mementos of company participation in many fire company and other parades.

From its meager beginning until now the fire company has prospered. The original building seems more than double in size since an addition in 1950. Added was a huge engine room, releasing the hall for recreation. The old doors from that part were removed and a matching brick front replaced them. The new garage section housed a much-in-demand tanker; a rescue unit equipped with resuscitator, stretchers, portable lighting and other rescue necessities; two pumpers; a radio room, large refrigeration unit and heater are there. The lower level facility and the original building are air-conditioned. The seemingly tremendous growth in the ten years led to the acquisition of a club and catering license issued May 10th, 1960. In addition, the company owns three rental properties and two extra parking lots.

It was hard to imagine how the company operated prior to 1953 before the luxury of a two- way radio system. The firemen are indebted to one of their own, the late R. Mark Edwards for the acquisition and installation of two way radios in all fire company rolling stock, and in the establishment of a base radio station in the firehouse. The resulting need for radio operators, their schooling and licensing, was met with his help also. Mr. Edwards was responsible too for the requisitioning tanker, proven a very valuable addition to the fire company and to neighboring companies, too.

In 1955, the fire company purchased a GMC truck with a 750 gpm pump and 1000-gallon tank. Nine years later, in 1964, they added a GMC Hy-Pressure and rescue truck holding 500 gallons of water, to their fleet of rolling stock.

Parkland Fire Company, its territory grown to include Langhorne Terrace, is a member of the Skyline Fire District Association, reported to be the only active organized group of fire-protection, fire-fighting personnel in the state of Pennsylvania. Its inception came about in 1949 when fire companies from three boroughs- Langhorne, Penndel and Hulmeville – teamed with Parkland to discuss closer cooperation for dates for fund drives, dinners and the like. When headway was slow, Angus Johnson, Middletown’s first manager, was invited to help. From then on, meetings were held in the township building with Mr. Johnson’s help and the Four Company Fire Association was formed. The township was divided four ways – in the fire company language - with each having a section to protect and solicit from. This proved very helpful. The Skyline Fire District Association now consists of Langhorne, Parkland, Penndel, and William Penn.

In late 2003, construction was completed on a pole barn construction type building at 840 Avenue C. This building houses the Utility truck and also the Field truck. It also has an administrative office, which is furnished partially by the Relief Association, also an air compressor system designed to refill air bottles, full bathroom and wash sinks. During the fall of 2008, the company had received grant monies to refurbish the engine room at the 831 Avenue D location. This grant funded new drywall, paint, and HVAC insulation work. Later during that process, a new slip-resistant floor was installed. The floor features a non-slip surface as well as featuring the department logo at the front of the bay. Other upgrades to the building occurred in 2010. This time, the upstairs recreational room was the focus. New flooring, lighting, furniture as well as a kitchenette were installed.

2011 brought a new piece of apparatus to the Parkland Fire Company fleet. The company added a 2011 Pierce Arrow XT PUC to it's roster. This pumper was paid in part by a grant received through the Pennsylvania RDA program, a program that is funded by casino revenue. The balance of the purchase was made by the VFRA of Parkland. It features a 1500GPM pump, 750 gallon water tank, 30 gallon foam cell and seating for 8.

2013 also brought some changes to the apparatus roster. The company approved to replace it's 1999 E-One rescue with a similar style rescue-pumper to the 2011 Pierce Arrow XT. During this process, the body also approved the sale of it's 1996 Pierce Lance pumper in addition to the E-One rescue truck. In July of 2013, the Silver Lake Fire Department in North Carolina had agreed to purchase the rescue truck. In August of 2013, the Ashland Fire Company of Pa. had purchased the Pierce Lance. Delivery of the new rescue took place in June of 2014. 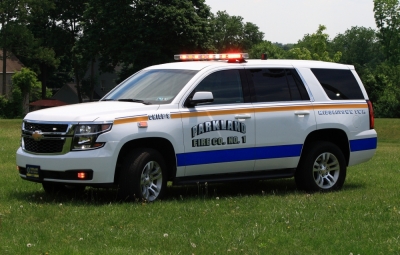 This site has been viewed 78,545 times.
Calls
News
Events
Pictures
Apparatus
FollowTweet
Maintained by the members and staff of Parkland Fire Company. Designated trademarks and brands are the property of their respective owners. Copyright © 2006-2022. YourFirstDue Inc. All Rights Reserved. Content on this web site is supplied by Parkland Fire Company. YourFirstDue Inc. cannot be held responsible or liable for any content, text, pictures, or any other media found on this web site.
Management login
Powered by